Beethoven's father, Johannes, was a court Tenor and pianist and was the first person to instruct young Ludwig in music. He taught him the piano, violin, and also possibly the viola. He went to elementary school in the Neugasse until his first public performance at the age of 7, where his father, seeing the latent talent that his son possessed, sought out for him other teachers, more suited for his talent. The most notable of his teacher was Christian Gottlob Neefe, who was responsible for introducing young Ludwig to the music of Johann Sebastian Bach. By 1782, Beethoven was already assisting Christian Gottlob Neefe as deputy court organist in Bonn, and it was in the same year that his first work, a set of variations on a march theme by Dressler, was published. He then played viola in the Bonn symphony until he went to Vienna in 1787, with the idea of studying with Mozart. His plan for studying with Mozart was cut short by the sudden death of his mother: he was recalled back to Bonn to be at her bedside when she finally passed on. He returned to Vienna in 1792, to study with Haydn (Mozart having died in 1791).

For the rest of his life he remained in Vienna, where he wrote his most remembered, and popular pieces including Symphonies 4, 5 and 9. He became well known at first, for his piano playing, having attained the level of virtuoso, and became well known among the aristocracy for his ability to improvise. By 1802, he was to have written 32 of his piano sonatas, and his first 2 symphonies, 18 string quartets, and his first 3 piano concertos. Sadly though, it was around this time, that the deafness, that he had noticed coming on 5-6 years previously, began to hit him even harder. This was a time of great despair for him, as is seen in the letters he wrote to his brothers in the "Heiligenstadt Testament", which were never sent, but were found among his possessions along with the "Immortal Beloved " letters, after his death. During this middle period of his life, he wrote symphonies 3-8,piano concertos 4 & 5, and his violin concerto, to name a few.
His involvement in the custody dispute of his nephew Karl, also slowed his musical output, and his production of music until around 1816 was almost stagnant. But the years following 1816 are arguably his most productive, with his 9th symphony, his final 7 piano sonatas, and a set of string quartets, which unlike their predecessors., have 6 and 7 movements, instead of the usual 4. He was able to complete these masterful creations, including the extended finale in the 9th symphony, Ode to Joy, while being almost completely deaf. There is a story that circulates which says that at the finish of conduction the 9th, he just stood there facing the symphony, and not knowing that the crowd was applauding, because of his deafness, and his ability to hear the applause. He had to be turned around, to see the effect of his musical masterpiece upon the crowd. He continued to compose late into his life, until his death. He was buried with honors in Vienna, and his funeral was said to have been attended by more then 10,000 people, which shows the true following that his music created among the people who were blessed with being able to hear, enjoy and experience it.

Sonatas for Solo Instrument and Piano 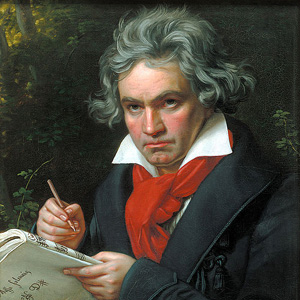