Brahms was born into a poor family. His father was a double bass player and his mother a seamstress. His father recognized his son's talents when he was quite young. Brahms' parents emphasized education, studying piano at the age of seven and theory and composition at age 13. Brahms supported himself by playing at bars. By doing this he was able to study music. His first public performance as a solo pianist was in 1847 at the age of 14. In 1948 he was making his living by playing in taverns and dance halls.

Brahms was very close to Robert and Clara Schumann. Clara and Johannes fell in love with each other, yet their relationship was strictly platonic. Even after Robert's death, their special relationship continued. He fell in love with several women but always backed out before the relationship turned to marriage. The early works of Brahms had primarily been chamber works, concertos, piano music, and choral pieces. When he served as music master to the Prince of Lippe-Detmold in 1857, he began to compose symphonies. Brahms received an honorary degree from Cambridge University before dying of liver cancer. 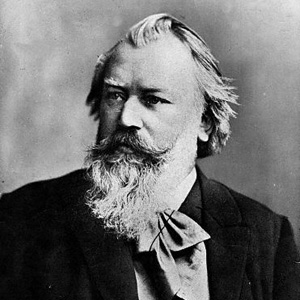