Mozart's father, Leopold, was an Augsburg native who came to Salzburg to attend college but ended up becoming the Kapellmeister of the Salzburg court orchestra. At 3 years old, Mozart began experimenting with the piano, picking out thirds, noted his older sister Anna Maria. Leopold Mozartbegan devoting most of his time to the musical education of his son and daughter on various instruments. At 5 years old Mozart learned his first muscial piece, a scherzo by Georg Christoph Wagenseil. The five year old also wrote his first composition, Andante in C. As a child Wolfgang and his sister and parents traveled all over Eastern Europe playing for the crowned heads. Mozart composed over 600 works, mostly between 1761 and 1766. The majority of his compositions were classical sonatas, concertos, symphonies and minuets to be played primarily by keyboard, violin, and harpsichord. He also wrote some of music's most enduring operas.
The Köchel catalogue written by Ludwig Köchel in 1851 is a complete chronological catalog of Mozart's works. The Köchel (K or KV) numbers are assigned in what was believed to be chronological order. 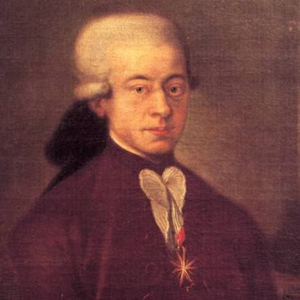