Born in Austria to an impoverished knightly family, Walther von der Vogelweide (Walter of the Bird Field) belonged to the lower ranks of the nobility known as the ministerialis (minstrel), he owned neither land nor title and traveled across the German lands, performing his songs for a living. There are no written records of Walther’s life, and the main source of information come from his own poems and occasional references by contemporary Minnesingers.

As a youth, Vogelweide went to the Viennese court of Duke Frederick I, of the Babenberg line, and became a pupil of the famous singer Reinmar von Hagenau.

This time was to be known as the happy period of his life with poems sung of love and nature. Then after the Dukes death in 1198, he began the years of wandering, from court to court, singing for food and lodging. He spent time with the court of Philip of Swabia and Otto IV of Brunswick. During these years his lyric took on less of the theme of love and more of the criticism of politics and the Church. He later joined Emperor Frederick II, who gave him a fief near Würzburg. Vegelweide is presumed to have died around 1230 and was interred in the cloister garden at the Cathedral in Würzburg.

Vogelweide created verse and music for all his works and sang the songs himself as he moved from place to place. His fame was widespread. His minnesongs were varied in topic an addressed ladies of rank, humble lasses; dancing songs; songs of nature and season, of complaint and condemnation; fables; riddles; parodies; elegies; prayers; accolade; rants; national pride and a crusading song of Christian salvation. After the death of his teacher, he composed two of his most beautiful lyrics. He was particularly noted for his bold political songs aimed at authorities from popes and emperors on down, attacking them for malfeasance, duplicity, greed, and other vices. But Vogelweide was just as critical of society. He never compromised his ideals or questioned Christian dogma.

Under den linden an der heide

Psalm in A minor, for organ 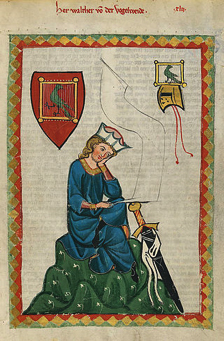