Richard Wagner spent his childhood in Dresden, Germany and later studied music in Leipzig from 1831 to 1833, where he attended a performance of the 9th Symphony by Beethoven in 1828. He later worked as a chorus and music director in several towns, ending with Riga in 1836, where he married Minna Planer on November 24th. In 1843, after the performances of his operas Rienzi andThe Flying Dutchman in Dresden, Wagner was appointed the Royal Saxon music director of the court orchestra for life. After the completion of Lohengrin in May 1848, Wagner passionately engaged himself in the revolution. In autumn 1848, under the influence of the revolutionary events and the writings of Ludwig Feuerbach and Pierre-Jean Proudhon, Wagner conceived the fable that was later set to music in the tetralogy in his music festival, The Ring of the Nibelungen. Wagner was actively engaged in the Dresden uprising from May 3-9, 1849, and as a result he was forced to leave Dresden with the leaders of the uprising to avoid arrest, becoming exiled to Switzerland.

During the first years of his exile Wagner still hoped that the revolution would break out again in Germany. In order to define his objectives define objectives the of his artistic creation, he wrote several works based on the ideas of his last months in Dresden, such as Art and Revolution (1849), The Work of Art of the Future (1850) and Opera and Drama (1851). While in exile, Wagner created many of his musical works, which made him the greatest German musical dramatist of the 19th century and established his worldwide reputation. In 1862 Wagner was granted an amnesty by the Saxon government and two years later acquired as his patron Bavarian King Ludwig II. In 1866 his wife, Minna died and Wagner is forced to leave Vienna because of an affair with Cosima von Bülow, wife of Hans von Bülow and daughter of Franz Liszt. Four years later, Wagner and Cosima got married in Luzern, Switzerland. During a travel through Bayreuth in 1871, Wagner found a place to build an opera house, which Ludwig II was happy to fund. A year later he moved to Bayreuth to set the stage for the first Bayreuth festival (1876) and his 26-year composition of the Ring of the Nibelung.
Wagner's health began to decline and he and his family moved to Naples, Italy in 1880. He completed his last work, Parsifal, two years later, at which time it was played at the Second Bayreuth Festival. At the festivals finish, Wagner and his family traveled to Venice, where he died of a heart attack in 1883. His wife, Cosima, clung to Wagner's body for 24 hours, after which he was buried in the family mausoleum in Wahnfried, Bayreuth.
Wagner's music has been used extensively in cartoons, commercials, and movies because of the memorable melodies and highly emotional character. One of the most famous uses of his music was used in What's Opera Doc? starring Buggs Bunny and Elmer Fudd. The soundtrack includes orchestral bits of Der Fliegende Holländer, Tannhäuser and Walküre. 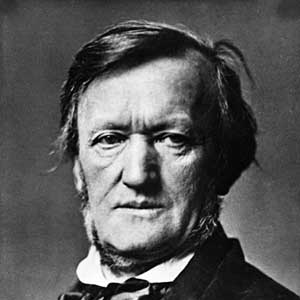