CLASSIFICATION: aerophone, wind instrument
Western Equivalent – clay ocarina
HISTORY: The early xun was made of baked clay by the legendary Bao Xin Gong or by Fuxi, the first male ancestor in Chinese myth. Its construction came to be standardized in the Shang dynasty (1766-1122 BCE).

PHYSICAL DESCRIPTION: The xun is generally pear-sharped with five finger holes, three at the front and two at the rear. Later types with several finger holes were melodic and were used extensively in the court traditions as well as by the common people.
SOUND PROPERTIES: Its sound is very mellow and often used to express mournful or sorrowful feelings in a composition.
RANGE: The xun is capable of a one octave range. 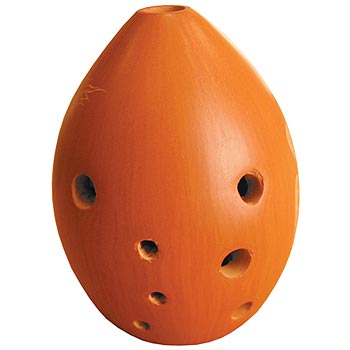