A chord having usually, but not necessarily, five tones, the interval between the base note and the highest note being a ninth. The other notes in the chord would be the root, third, fifth, and seventh. In the C chord below, the root is C, the third is E, the fifth is G, the seventh is B, and the ninth is D. 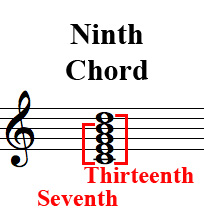