Leaning note; grace note; note of embellishment usually one step above (sometimes, though seldom, it is one step below) the main note. Before an even or unaltered note, the appoggiatura generally receives its face value, that is one-half the value of the note that follows; before a dotted note it receives more than its face value, that is to say that it should be given two-thirds of the value of the following note. If the note is of the same pitch as the principal note of the appoggiatura, the grace note receives the entire value of its principal note,but is carried to the next note with strong portamento. 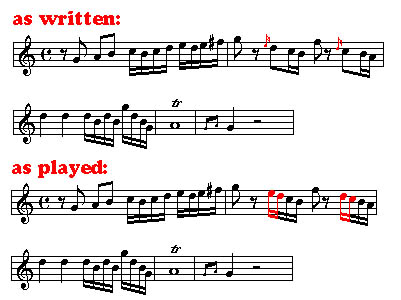